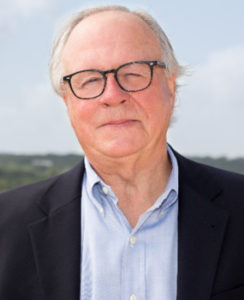 As a freshman from a small town attending a large university like the University of Texas, Sandy Watkins ’70 didn’t feel socially comfortable going through recruitment. Despite not joining a fraternity his first year at UT, he started spending a lot of time at the Gamma Iota Shelter and becoming good friends with Delts like Bubby Lee ’70. Sandy elected to sign up for recruitment as a sophomore, but still didn’t go through. It didn’t take long for Bubby to give Sandy a call to let him know that the chapter voted to let him join. That marked the beginning of what Gamma Iota would give Sandy.

“Delta Tau Delta was the only fraternity for me,” Sandy said. “The relationships have lasted a lifetime. I developed my self-confidence and the lifelong belief that all things are possible at Gamma Iota.”

Interestingly enough, the men of Gamma Iota lived in the old Phi Mu house on Pearl while the Shelter was being remodeled during Sandy’s sophomore year. Fast forward some 50 years later, and Sandy has paid it forward toGamma Iota by not only making but increasing his pledge to the Texas Delts: Continuing the Tradition capital campaign to help fund essential updates to the Shelter. He’s calling upon all the brothers who have yet to contribute to the campaign to show their appreciation for Gamma Iota by giving to the campaign today.

“I got a lot from Gamma Iota. It changed my life and I owed it to them,” Sandy said. “There are several guys that got a huge benefit from the Delt experience who haven’t supported this effort. That isn’t right, so I felt obligated to help. It isn’t a lot of money to give when it’s spread over time. Giving back is the right thing to do.”

Sandy has shared many laughs with his brothers over the years, from pranks he pulled with Scott Smith ’71 as an undergraduate to couples trips to Mexico as an alumnus. It’s important to Sandy for the Gamma Iota undergraduates and future Delts to also develop self-confidence and lifelong friendships, and he’s doing his part to make that possible by giving to the campaign.

The self-confidence Sandy gained from Gamma Iota has paid huge dividends throughout his career as an entrepreneur. He’s been a part of founding 14 companies over the past 40 years. Sandy is the chairman of Open Lending, which he founded in 2000 in Austin. Open Lending specializes in loan analytics, risk-based pricing, risk modeling, and automated decision technology for automotive lenders throughout the United States.

“None of my Delt friends would have imagined that I would create and build a $5 billion company. It has been a joy creating the culture of family with employees at Open Lending,” Sandy said. “The life of an entrepreneur has been like a rollercoaster, but I wouldn’t trade it. There is no feeling like taking an idea from conception to building a successful company. Perseverance and not being willing to fail are traits one learns. It has also been a blessing and great joy to mentor young people and see them develop.”

Sandy and his wife, Helen, have also been proud to serve as mentors to their three children and soon-to-be five grandchildren and celebrate their many accomplishments. As his brothers do the same with their respective families, Sandy hopes that they’ll reflect on the qualities that Gamma Iota instilled in them. He doesn’t want you to miss out on this chance to thank Gamma Iota by giving to the campaign.

You can connect with Sandy at sandy@openlending.com.