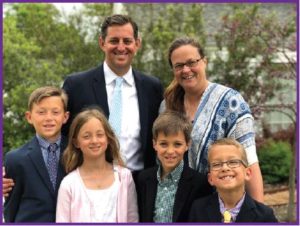 Life at the University of Texas wouldn’t have been the same had Ryan Harrington ’99 not become a member of Delta Tau Delta. From the first day of recruitment, he knew Texas Delt was the perfect place for him on campus. Everyone he met displayed outstanding camaraderie and community, which helped solidify his decision to become a member and expand his college experience.

Today, Ryan is the founder, president, and CEO of Trinity Healthcare. With approximately 1,400 employees, Trinity Healthcare owns and operates nursing homes throughout the state of Texas. “My time with Texas Delt was an important part of my college and growth as a person,” Ryan said. “It provided me with opportunities for leadership roles, networking, interacting, and engaging with my peers that are still valuable today.”

When an opportunity to give back presented itself, Ryan wanted to do his part in allowing future members similar experiences to the ones he had. Not only that, facility improvements are necessary for the chapter to remain a leader not just in the Greek system, but as a campus organization at UT. “If you believe like I do that Texas Delt was a beneficial part of college life, you should consider supporting the continued development of our chapter for future generations.”

Ryan and his wife, Nissa, live in Fort Worth with their four children: Henry, Andrew, Avery, and James. He remains supportive of Texas Delt, has served on the Texas Delt Alumni Board, and in his spare time, he coaches his kids’ soccer teams and attends their events. You can connect with Ryan at ryan.harrington@yahoo.com.