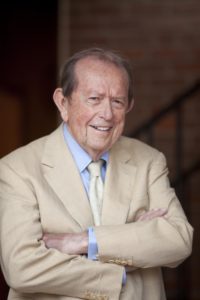 Of the many cherished memories Meredith Long ’50 has of Delta Tau Delta, the memory of the beautiful chapter house located at 2801 San Jacinto, one of UT’s finest facilities, is the strongest. “Both the house and the Delts who lived there, many of them older than me, provided a warm place to work my way through the University,” Meredith says. “Gamma Iota provided a homing nest for many of the undergraduates during my time, and continues to do so today. I became a more confident, social, and successful person because of the men I was surrounded by in Delta Tau Delta.”

One of the most admirable qualities of many of the men Meredith associated with in Gamma Iota was that they were WWII veterans. He says, “Several of the guys in the chapter were veterans coming back from WWII. I wasn’t a veteran at the time; I was too young. But these guys had a certain attitude about them, and I became friends with many of them. They were certainly an outgoing bunch, and I have valued these friendships since.”

These brothers taught Meredith the ropes in Gamma Iota and inspired him to become involved in many of the activities the fraternity hosted or participated in at UT. Among Meredith’s favorites were the evening serenades that Delta Tau Delta performed for young ladies who were Sweethearts of the Delts, as well as when he and Kleber Miller ’51 joined UT’s debate team. “We were on the first string debate team of the University of Texas. We debated and won against Oxford University, Cambridge University, and many more. These unforgettable moments with my brothers have stayed with me for a lifetime, which is why I encourage current and future Gamma Iota Delts to be involved regularly with the daily activities and events in the fraternity. You’re only an active member for so long; don’t miss out on making once-in-a-lifetime memories!”

Meredith graduated from UT with a bachelor’s degree in government and went on to become a dealer in fine art, specializing in American art. He was also very honored to be made a member of the Friar Society of the University of Texas. In the right season, you’ll likely find him hunting or fishing. Meredith and his wife, Cornelia, live happily in Houston, Texas. He can be reached at long@mlongoffice.com.