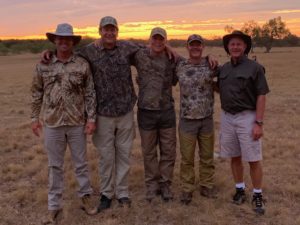 When Jim Milligan ’83 was looking into joining a fraternity at the University of Texas at Austin, it was an easy decision for him to follow in the footsteps of a few of his good high school friends to Delta Tau Delta. Jim is proud to be a part of Gamma Iota’s great tradition at UT and it’s important to him to keep it going for many years to come. By contributing to the Texas Delts: Continuing the Tradition campaign, Jim is doing exactly that.

“When the campaign launched, I dismissed it as too ambitious. I told myself I will wait for some time to pass and campaign goals get more realistic,” Jim said. “Most recent campaign updates show the campaign is going to hit its goal if some of us laggards step up. I was totally in awe of the dollars raised and the number of donors.”

Another amazing aspect of Gamma Iota that led Jim to donating was the diversity within the active chapter. Jim has spent the last four-plus years chairing the National Board of Summer Search, which is a non-profit that mentors high school and college students who come from low income communities. The work he has done with the program has reminded him of the invaluable mentorship he received from his Gamma Iota brothers.

“Several of the older guys in the fraternity took me under their wing. They were great mentors and role models,” Jim said. “At the same time, my best friends in life are the brothers from my class. I was given some awesome leadership opportunities and that really stretched me as well.”

Serving as Gamma Iota’s chapter president and treasurer helped prepare Jim for Stanford Business School, which led to a 20-year tenure with Goldman Sachs. Jim and one of his Goldman Sachs colleagues went on to build Baker Street Advisors, where he is still a partner today.

“I’ve had an awesome career. I feel like being a Delt, having been in leadership positions in the chapter, and being selected as a Spur by my colleagues who were Delt Spurs have played a big part in that,” Jim said. “There have just been a lot of steps along the way. That was a super defining period of my life. There’s a soft spot in my heart for all my Delt memories, great times, and all the great friendships that I’ve made.”

The family feel of Gamma Iota is still on display when Jim and his sons go dove hunting with his Delt brothers and their sons every Labor Day weekend. He knows Gamma Iota will generate more lifelong friendships if more brothers contribute to the campaign.

“I want to acknowledge that the chapter was great for growing up and expanding my horizons. My sense from talking to some of my fraternity brothers who also have Delt sons is that the same thing is still happening,” Jim said. “I’m super impressed with how many Delts have given to this campaign. I never dreamed they could get close to the goal. Here we are. We’re right on the doorstep.”

You can connect with Jim at jamesemilligan@gmail.com.