CAPITAL CAMPAIGN COMING TO A CLOSE ON JUNE 30
Will You Help Gamma Iota Reach the Finish Line?

When I saw the news about the 30th Annual Austin Marathon being rescheduled for late April, it got me to thinking about how many strong-willed people will be coming to Austin from all over the country with a common goal in mind of reaching the finish line after a long race. Some of you might be running in it, while many others of you might be wondering how in the world this can relate to Delta Tau Delta at the University of Texas.

As you’re all aware, Gamma Iota has been making big strides during a marathon of its own, thanks to the generous efforts of alumni who have contributed to the Texas Delts: Continuing the Tradition capital campaign. I am extremely thankful for those 599 brothers who are strong-willed in their own right due to the core values of truth, courage, faith, and power that have been instilled in them as Texas Delts. Their dedication to Gamma Iota has collectively raised more than $9.48 million to make essential improvements to the Shelter.

While their efforts have led to Gamma Iota having one of the most successful campaigns in the country, we need all brothers chipping in to reach our $9.5 million goal before the campaign ends on June 30. I am confident we can reach the finish line with more brothers participating, as we continue to see increased support from both new donors AND donors who have increased their pledge. Reaching the $9.5 million goal is critical to Gamma Iota’s success for three specific reasons.

Whether it’s been from the brothers who helped build the Shelter or those who have served on the House Corporation, we all benefited from the Delts who preceded us. This is our chance to give back to Gamma Iota and benefit our brotherhood for generations to come. All gifts, no matter the size, are greatly appreciated as we close in on the finish line. We would also love to give you the special recognition of including your name on the Delt Donor Wall, which can be secured with a minimum gift or pledge of $5,000.

Distance running and making financial contributions are both difficult when you’re doing them alone. However, both objectives are easier when aiming to achieve a common goal with your best friends. I encourage you to give your brothers a call to reflect on your Delt experience. I think in doing so you’ll realize that we owe it to Gamma Iota’s collegians and future brothers to give them the same opportunities that we enjoyed from Delta Tau Delta. Together, we can get Gamma Iota to the campaign’s finish line and celebrate Delta Tau Delta being the top fraternity at the University of Texas. 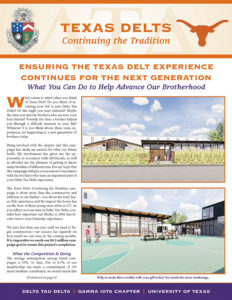 Click the newsletter image above to view more renderings. Click here to read the rest of our newsletters.