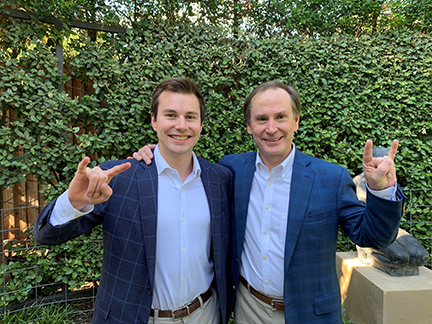 While unfamiliar with Delta Tau Delta before college, Bob Carrozza ’81 found the brothers he met during recruitment to be a breath of fresh air. “The small-town Delts I met were so different from the big-city kids I grew up with,” he reminisced. “Their positive attitudes, country ways, and one-liners had an authenticity that captivated me!”

When his son, Vince Carrozza ’18, enrolled at UT, Bob deliberately avoided pushing the Texas Delts on him to let him make his own decision. Nonetheless, the family tradition persisted, and Vince even took the reigns as president of his member class.

“It was a great way to connect with the campus around me and an easy introduction to college life,” Vince said. “The brothers seemed like they would always have my back in life. Having my father as a Delt made parent’s weekends an absolute blast too!”

Bob began a career in real estate after graduating, eventually becoming president of Center City Inc., where he has served for 30 years. He describes it as a “small family office, maintaining an active but highly diversified portfolio.” Vince took a similar career path, thanks largely to Delt influence; fraternity connections helped him land his first finance job as well as his first full-time job at Swearingen Realty Group.

“I like social-heavy work and getting out of the office, so this was the perfect path for me.” Bob, too, is thankful to the chapter for helping him build the confidence and social skills instrumental to his success.

The lessons and advantages gained through Delta Tau Delta inspired both father and son to contribute a family gift to the Texas Delt campaign. The Carrozzas each recognize the need to update the Shelter to remain competitive for recruitment. “Potential new members pay close attention to house location and amenities,” Vince noted. “All the other fraternities are upgrading, and Delt needs to do the same to stay relevant.”

Bob encourages everyone to think of their own experiences, as well as those of the generation to come, and give at whatever level they are comfortable with. “Think of the brothers whom you might encourage to give as well,” Bob said.

Bob is continuously impressed with the active chapter. “They are perhaps even better at preparing themselves for the future, and from what I can tell they still know how to enjoy themselves.” Bob and Vince both love visiting the Shelter and tailgates when they can. “Delt has always had the best tailgates,” Vince said. “We are closest to the stadium and we smoke an incredible brisket. If I’m ever in Austin for a game, I’m going to the tailgate.”

For father and son, some of the best Delt memories involve simply shooting the breeze and spending time with their brothers. Vince shared a vivid memory in particular: “We were all eating dinner, and suddenly Matthew McConaughey ’92 struts in, sits down at the table, and starts telling stories. It wasn’t a celebrity moment and wasn’t treated as such; it was just Delt brothers casually swapping stories. It was an awesome moment and an inspiration to know some very successful people have started from the same spot we are.”

Bob lives in Dallas and enjoys catching up with brothers in the area. “Visiting a brother I haven’t seen in years feels like stepping back in time…a time never forgotten and always appreciated!” Vince added, “I work with them. I go on trips with them. I go to football games with them. Delt is very much still in my life.” Both like hunting, fishing, and outdoors in general, and most weekends Bob and his wife leave the big city to relax at his ranch. “Of course, one of my Longhorns is named Bevo!”

You can connect with Bob at rcarrozza@ccidallas.com and Vince at vince_carrozza@yahoo.com.