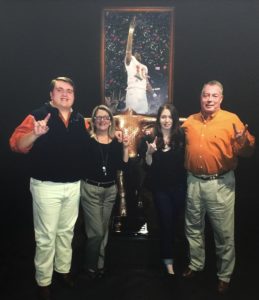 Enjoy your time to the fullest, but take care of business—that’s the advice Bill McMeans ’80  offers to undergraduate Delta Tau Delta members. It’s something that hits home for Bill and his family, especially after the passing of his son, Austin McMeans ’17, last July.

“This past year was extraordinarily difficult with the passing of our son. The Delt family has been really great in helping us cope with that loss,” Bill says.

Austin was a proud member of the fraternity and the president of his pledge class. Bill says that outside of his wife, Tracie, Austin was his best friend, and he paid him the greatest compliment by attending the University of Texas and becoming a Delt.

Bill visited the house last November for Alumni Weekend, and the chapter did a special toast to Austin. Talking with the active members made Bill confident that Delta Tau Delta is developing strong future leaders.

When Bill came to the University of Texas, he chose to become a Delt because he was looking for a home with men who shared common interests. He jokes that he was a “professional rushee” for three semesters before he joined the chapter.

“As our society manages to inadvertently diminish traditional values, it’s important that our young men have a place where certain time-honored traditions remain constant,” Bill says. “Delta Tau Delta certainly provided that for me, and sometimes in ways that I did not fully understand until I was much older.”

Bill advises undergraduate members to get involved and seek out alumni as mentors. He encourages fellow alumni to stay involved with the chapter as they now have a chance to help shape the future of Delta Tau Delta.

“Perhaps an individual alumnus has not discovered what his time as a Delt undergraduate has done for him, but I guarantee as time goes by, those gifts and learned lessons will be recognized if that person gives it chance,” Bill says. “You only get out what you put into something.”

Bill and his wife, Tracie, live in Austin, Texas. His daughter, Kris, recently moved to New Zealand. Bill founded and developed a plastics company, Republic Plastics, which he sold in 2006. Since then, he has been investing in small private equities and doing entrepreneurial consulting. His e-mail is bmcmeans@austin.rr.com.